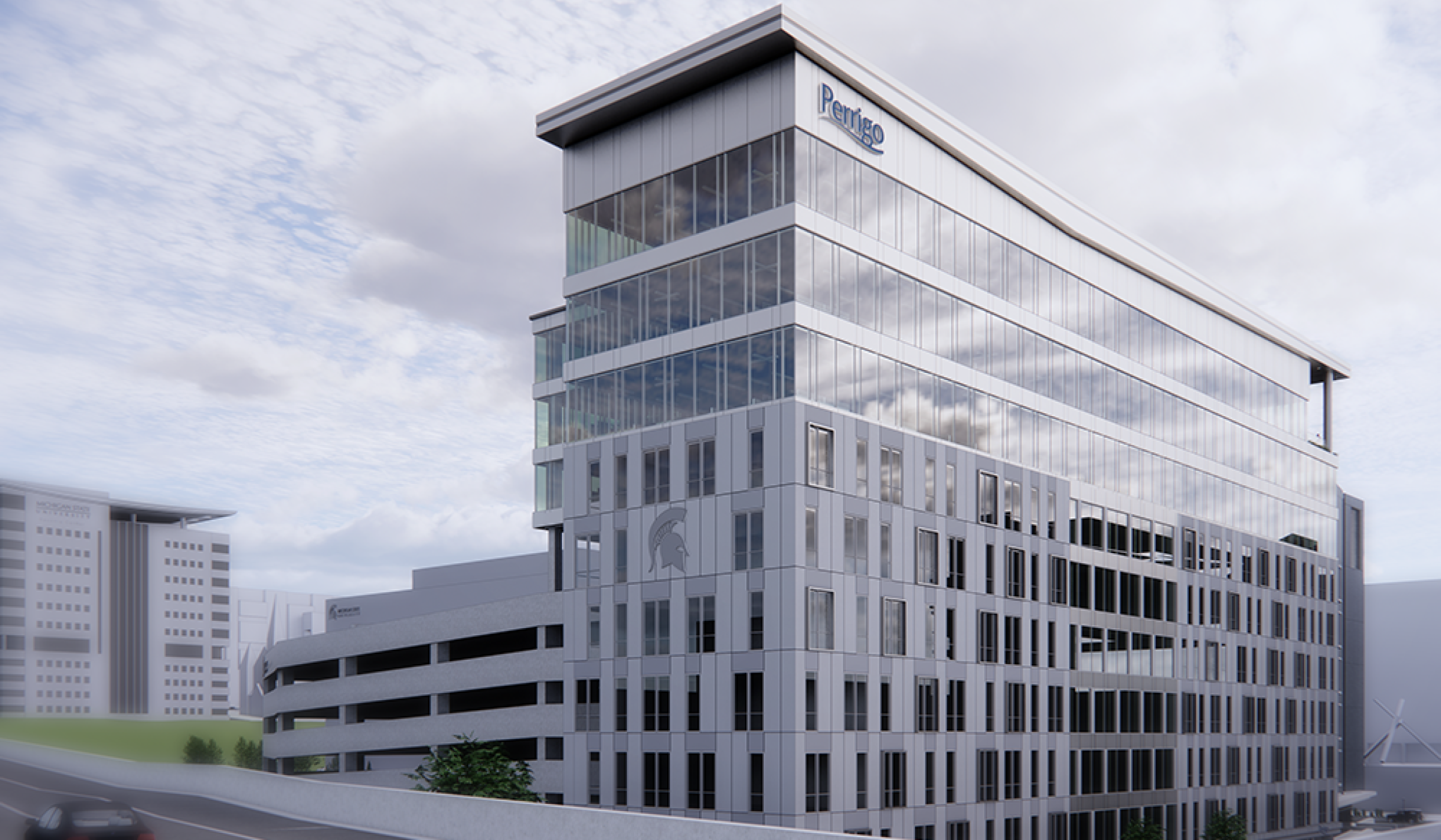 Today, The Right Place, Inc., in collaboration with the Michigan Economic Development Corporation (MEDC), Michigan State University, Rockford Construction, and the City of Grand Rapids, announced that global self-care provider, Perrigo Company plc, will establish its new North American Corporate Headquarters in downtown Grand Rapids. In addition to a capital investment of $44.7 million over the 15-year period of the lease, the expansion will bring more than 170 new jobs to the area.

Founded in 1887 in Allegan, Mich. Perrigo is a leading global provider of Quality, Affordable Self-Care Products. The company, which employs more than 4,000 people in West Michigan and 11,000 globally, has local operations in Grand Rapids, Holland and Allegan.

The new office will be constructed within Michigan State University’s Grand Rapids Innovation Park being developed and built under a public-private partnership model in a joint venture between Rockford Construction and Walsh Construction at 430 Monroe Ave NW, Grand Rapids, on what is known as the Medical Mile. The 63,550 square foot office space will primarily house corporate and functional leadership and certain administrative roles, and will feature adaptable workspace to promote collaboration opportunities.

“Perrigo established its roots in West Michigan more than 130 years ago. Since then, we’ve become an industry leader and created thousands of jobs in the region,” said Murray Kessler, President and Chief Executive Officer, Perrigo. “We are excited to continue our growth surrounded by organizations that share our passion for self-care in the heart of a thriving city. We are thankful for all of those involved in making this project a reality, especially Governor Whitmer, The Right Place and their partners at the MEDC.”

The Right Place worked closely with Perrigo, MEDC, Michigan State University, and other community partners to ensure the company continued its growth in the region rather than out-of-state locations in Chicago and Florida. With the approval of a $2M Michigan Business Development Program performance-based grant, the MEDC is supporting the expansion through the Michigan Strategic Fund.

“Since 1996, Grand Rapids has been investing in its now world-renowned health industry cluster focused on improving the lives of consumers and patients,” said Birgit Klohs, President & CEO of The Right Place, Inc. “The Medical Mile is a thriving hub for research and innovation and Perrigo’s decision to establish its North American Corporate Headquarters here further solidifies the Medical Mile and Downtown Grand Rapids as a destination for business success.”

West Michigan’s life science and medical device industries are growing at a considerable rate of 18.5%, outpacing the national average by more than double its growth rate of 9%

“The decision by Perrigo to establish its North American Corporate Headquarters in Grand Rapids underscores the strength of Michigan’s business climate and our talented workforce,” said Governor Whitmer, “This is great news for Michigan workers, their families, and our economy as we continue to move forward with economic recovery and growth here in our state.”

The City of Grand Rapids is supportive of the expansion and will be considering a property tax abatement. "This headquarters announcement solidifies the competitive advantage Grand Rapids provides to global companies like Perrigo,” said Mayor Rosalynn Bliss, City of Grand Rapids. “We look forward to their investment and its impact in Grand Rapids and the West Michigan region."

“Michigan State University is excited that Perrigo will be a major tenant in the MSU Grand Rapids Innovation Park,” said Norman J. Beauchamp Jr., MD, MHS, Michigan State University executive vice president for health sciences. “The focus of the innovation park is to bring industry together with academic research and clinical care along the Medical Mile in order to transform health care together. We are looking forward to significant opportunities to collaborate with Perrigo on efforts to improve access to and affordability of health care.”

“As one of the region’s largest employers with rich history of innovation and success, we congratulate Perrigo on their continued leadership and growth in West Michigan.” said Jennifer Owens, President, Lakeshore Advantage, the non-profit economic development organization assisting employers in Ottawa and Allegan counties.

“On behalf of our CBRE team, it has been a privilege to represent Perrigo in this transformational project, which we believe will have a positive and far-reaching impact for Perrigo, its employees, the West Michigan community and self-care industry as a whole,” said Drew Miller, MCR, Senior Vice President, CBRE Inc.