Today, The Right Place, Inc., in collaboration with the Michigan Economic Development Corporation (MEDC), the City of Grand Rapids, and Downtown Grand Rapids Inc. announced that global insurance broker, Acrisure, will be relocating and expanding its headquarters to downtown Grand Rapids. 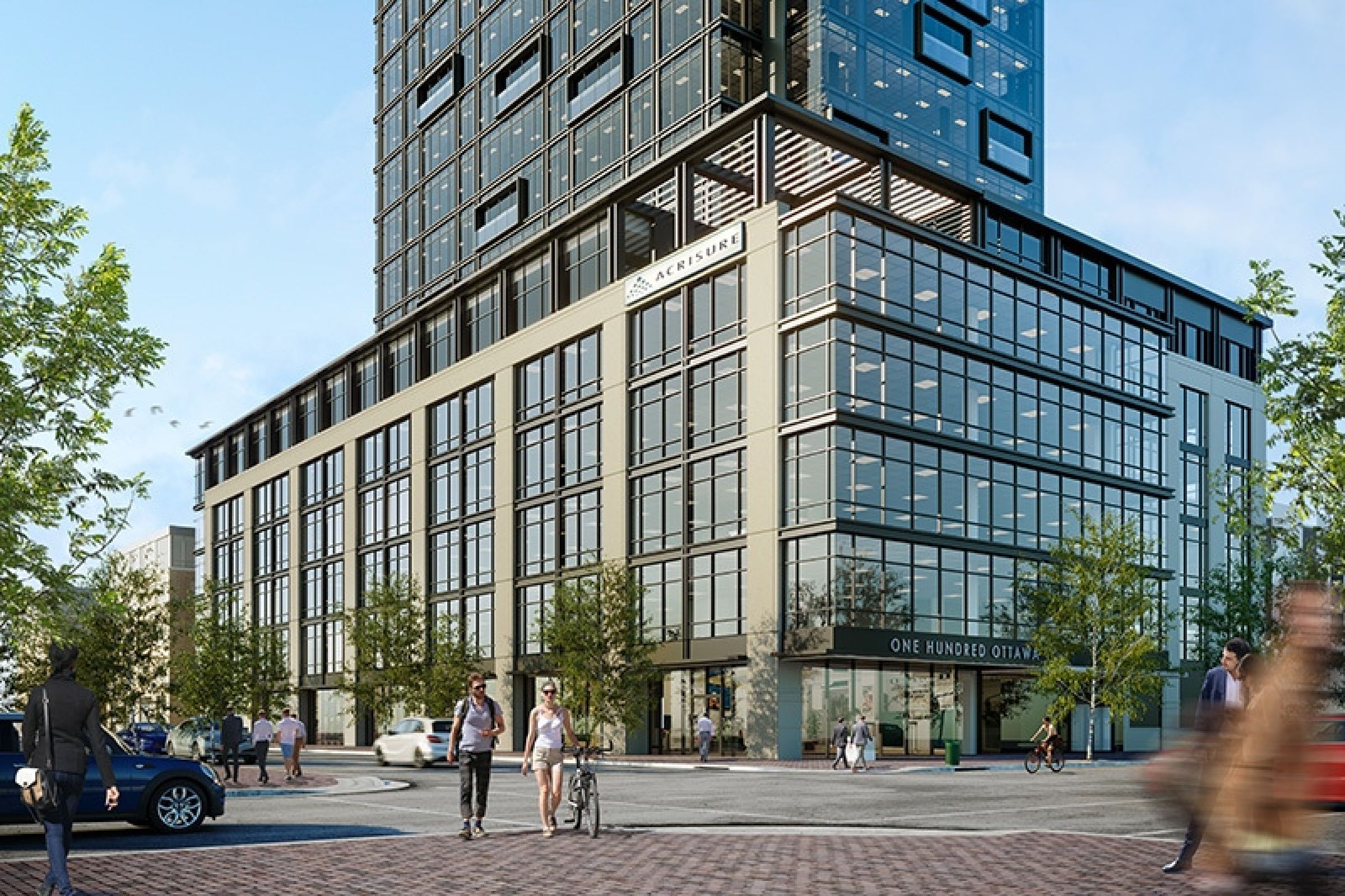 Today, The Right Place, Inc., in collaboration with the Michigan Economic Development Corporation (MEDC), the City of Grand Rapids, and Downtown Grand Rapids Inc. announced that global insurance broker, Acrisure, will be relocating and expanding its headquarters to downtown Grand Rapids. This expansion will result in the relocation of existing roles as well as the creation of 400 jobs and a capital investment of $33 million over the near term.

The company will lease space at the Studio Park development, located at 123 Ionia Ave SW, which will offer 105,000 square feet for its new and relocated employees. Presently, Acrisure is spread across multiple locations in the Grand Rapids area, including its current headquarters in Caledonia, Michigan, at 5664 Prairie Creek Dr. SE. Upon completion, all regional employees will move to the new headquarters at Studio Park.

Acrisure has become the fastest growing insurance broker in the industry’s history and one of the top 10 brokers globally. As part of the new headquarters plan, the company will continue to grow, including hiring for multiple positions, in the areas of finance, accounting, and regulatory affairs, among others. As part of its talent recruitment strategy, Acrisure will be providing parking for employees downtown, as well as increased salary to cover the City of Grand Rapids income tax, for all new and relocated roles.

“From 2009 and modest beginnings to now more than $1.8 billion in revenue, Acrisure has proudly called West Michigan our home,” said Greg Williams, CEO, Acrisure. “As we continue expanding, we’re pleased with this collaboration to create a true global headquarters in the heart of Grand Rapids. This will be a world class home for a distinctly world class company that will enhance our ability to attract and retain talent to the region.”

“Acrisure has experienced significant growth over the past several years and their decision to locate a new headquarters in Grand Rapids further solidifies our region as a destination for business success,” said Birgit Klohs, President and CEO, The Right Place. “These well-paying jobs will have ripple effects throughout the community and will positively impact the entire West Michigan region.”

The Right Place worked in collaboration with Acrisure, MEDC, the City of Grand Rapids, and Downtown Grand Rapids Inc. to ensure the company continued its growth in the region, versus out-of-state locations.

In recognition of Acrisure’s significant capital contributions and the positive growth impact, the MEDC is supporting the expansion effort through the Michigan Strategic Fund with the approval of a $1 million Michigan Business Development Program performance-based grant, as well as a Good Jobs for Michigan Withholding Tax Capture for up to 10 years valued at $6 million. Acrisure will be the first company to receive support from the Good Jobs for Michigan program in West Michigan.

“The addition of Acrisure’s headquarters to our downtown is vital to our city and our residents,” City of Grand Rapids Mayor Rosalynn Bliss said. “We’re excited for the opportunity to be a part of Acrisure’s incredible growth story, and we look forward to working with the company as it expands in our community.”

“Acrisure’s decision to locate their headquarters in Downtown Grand Rapids is another reminder that place matters,” said Tim Kelly, President and CEO, Downtown Grand Rapids Inc. “In a competitive market, corporations need to appeal to talent, and talent wants to locate in a thriving urban environment where amenities like restaurants, retail and entertainment options are all within walking distance. We are excited to welcome Acrisure to the Downtown neighborhood, and look forward to helping them grow their presence in the community.”

For more information about careers at Acrisure please visit https://acrisure.com/careers/

Today, The Right Place, Inc., in collaboration with the Michigan Economic Development Corporation (MEDC), the City of Grand Rapids, and Downtown Grand Rapids Inc. announced that global insurance broker, Acrisure, will be relocating and expanding its headquarters to downtown Grand Rapids.