The morning after giving her State of the State Address in Lansing, Gov. Gretchen Whitmer traveled to Grand Rapids for a special edition of our Investor Breakfast series. Nearly 400 members of the West Michigan business community joined us for the early morning event, where the governor shared her vision for the State of Michigan and held a Q&A session. 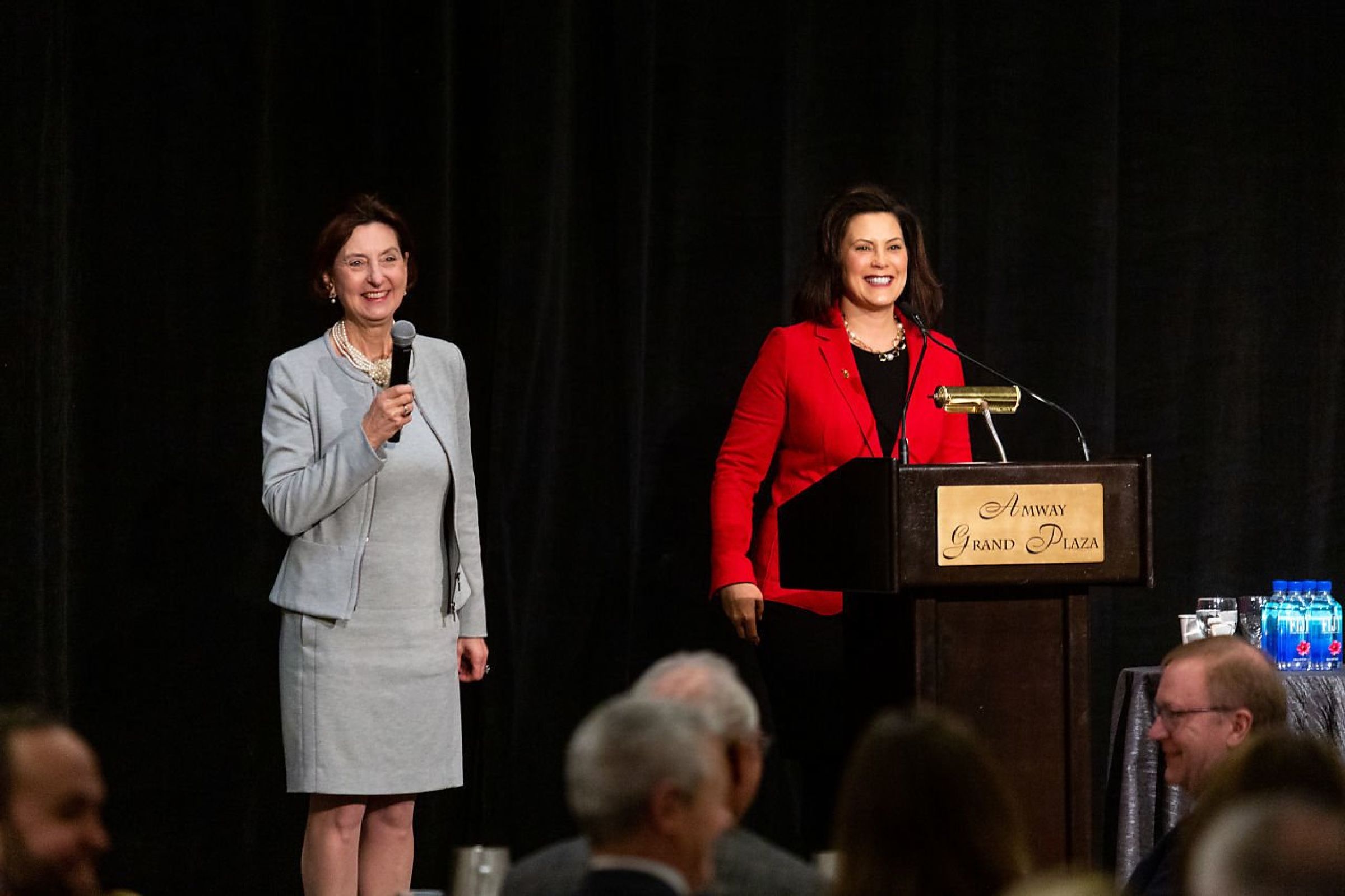 The morning after giving her State of the State Address in Lansing, Gov. Gretchen Whitmer traveled to Grand Rapids for a special edition of our Investor Breakfast series. Nearly 400 members of the West Michigan business community joined us for the early morning event, where the governor shared her vision for the State of Michigan and held a Q&A session. Here are some key items she addressed for our audience:

Most people in Michigan are familiar with the governor’s emphasis on repairing the state’s infrastructure – specifically, the roads. During the Investor Breakfast, she continued to stress the importance of addressing the crises we’re facing regarding our infrastructure.

“The average driver is spending $562 each year to fix their vehicles due to poor road conditions. Many bridges around the state have fallen into dangerous levels of disrepair, and are being held up by temporary supports,” said Whitmer, “To maintain our edge in mobility, we need to fix these issues. We can’t claim to be the center of mobility if we aren’t caring for our own infrastructure.”

The governor reaffirmed her commitment to developing a long-term solution to fix these problems, with plans to create a dedicated source of funds that allows for extensive investment in building safer roads around the state.

Education is another main point Whitmer addressed in both her State of the State and her presentation to the Investor Breakfast attendees. Citing findings from Education Trust-Midwest, which revealed Michigan is experiencing the worst decline in childhood literacy among 11 comparable states, the governor stressed the need to repair the state’s education system.

In part, she believes the problems have stemmed from a “continual game” that has been played with the state budget, which has pulled dollars from education to fill holes in other areas. To combat this, the governor has called for two new programs to redirect the educational paths of Michigan children and adults.

Michigan Reconnect, modeled after a similar program in Tennessee, would provide adults the opportunity to train in high-demand skills in order to find new jobs or advance in their current career paths. The MI Opportunity Scholarship would guarantee two years of debt-free community college for all qualifying high school students, while also providing two years of tuition assistance for Michigan students who graduate with at least a B-average.

Whitmer noted these plans are not limited to individuals planning to attend traditional colleges or universities, “We’ve done people a huge disservice by telling them the only way up is through a four-year degree.”

The governor stated a need to create clear, easy to find paths to skills that will lead Michiganders to the workforce in careers that allow them to make a good living. That includes skilled trades and other non-traditional paths, not just two and four-year degrees.

When asked about plans to support entrepreneurship, innovation, and continued business growth, the governor voiced support for the efforts of the Michigan Economic Development Corporation (MEDC).

Whitmer noted she’s had many conversations with individuals at the MEDC, and believes they’re doing great work for the state. Beyond that, she feels there’s an opportunity to do more and continue building the tools in its economic toolbox. She also voiced support for the use of incentive programs as a means to draw more businesses to Michigan.

Concerns surrounding inclusivity were voiced during the Q&A session, with members of the audience wanting to hear the governor’s stances on supporting minority businesses, and the pursual of full civil rights protections for the LGBTQ+ community.

The governor expressed support for both topics. Regarding minority businesses, she voiced her hopes of becoming a better ally to members of these communities and working with the MEDC to ensure greater access to capital.

Pertaining to the support of the LGBTQ+ community, she indicated intentions to renew efforts of expanding protections under the Elliot Larsen Act to include protection for all members of the community. Early in the year, Whitmer signed an executive order extending discrimination protections to cover individuals based on sexual orientation and gender identity within the state workforce, and for state contractors and services.

Concluding the event, the governor emphasized the importance of working together as Michiganders, “We need to start seeing one another as individuals again, not as partisan entities. Coming together and leading the way to solve problems we’re facing as a state is the only way things are going to get done.”